As a part of my new semi-vegetarian kick I decided to introduce some non-meat based dishes into my families normally set Thanksgiving roster. Over the next few weeks I am going to share them, one-by-one, in the order they were served. Our Thanksgiving meal always starts with soup. Usually it is a chicken-broth based parsnip and squash or split pea soup garnished with bacon or something cooked in bacon fat. For a non-meat alternative that would also be lighter, I looked to Bon Appetit and found a wonderful recipe for a coconut milk based carrot soup that, with a few slight tweaks, was a major crowd pleaser.

The coconut milk adds a layer of flavor not typically associated with Thanksgiving that is a relief to the palate, typically overloaded with carbs, starches, and dairy. It you want to make it vegan, omit the butter and sauté in olive oil instead. I also removed the chili oil as members of my family are allergic to hot peppers and the flavor with chili oil would be too far removed from the other dishes served throughout the meal.

Search for your craving! 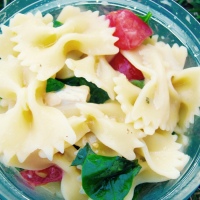